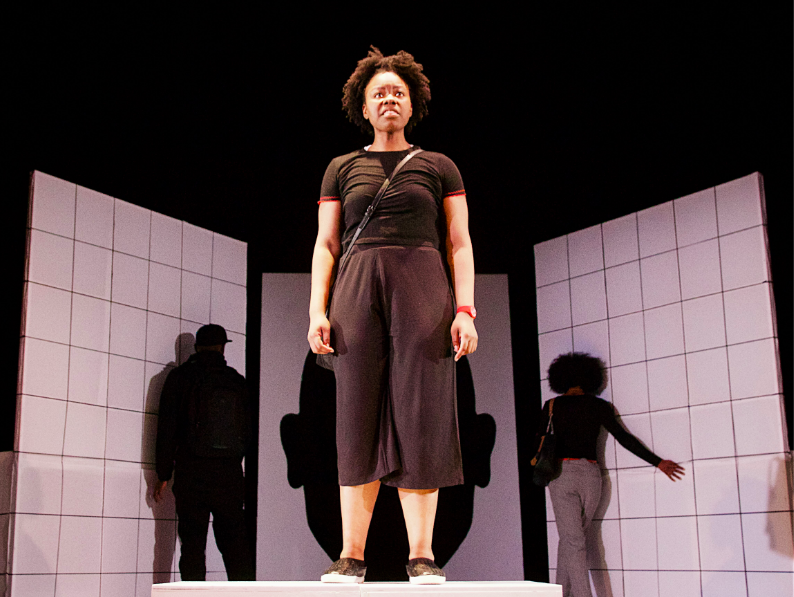 This is a tightly-focused, searing performance about how death in custody has a ripple effect for the deceased family that permanently damages them.

The writing, by Tom Wainwright is taut and highly emotional, weaving in themes of West African death rituals, the scariness of not knowing for sure what happens to someone when they die and the feeling of having to keep fighting – whatever the cost -when that family member has died unjustly. I loved that it was really clear about its overall message: that police racism is something that costs lives, but within that there was a lot of nuance; how long should you fight for the memory of someone who is gone at the expense of fully living your own life? What does it mean to be too black – or not black enough? how much is a girlfriend, boyfriend, husband or wife really part of their other half’s family?

The story is about Brian, we know before the play begins that Brian has died: the stage is strewn with flowers, cuddly toys and tributes. The walls display hand-written messages: ‘Black Lives really do Matter’, ‘RIP Brian’, ‘Brian <3 Another Life Lost’.

This play is as much about the repercussions of grief as it is about injustice. It reminded me a little bit of Nine Nights, in that it focused on the aftermath of a death, rather than the death itself and referenced the death traditions of the family. The Mother, played with humour and pathos by Muna Otaru, was tortured by dreams that her son, Brian, had not passed over to the other side, his soul trapped in a limbo state. Her dreams were presented by the rest of the cast speaking like zombies stuck in a slot machine: ‘cherry, cherry, cherry, bar, bar, bar’ delivered with jittering heads and deep monotone voices. Paired with the flickering red lighting, it was genuinely unsettling.

Each character is fully fleshed out, each facing their own deeply personal struggle. Sister, played with strong physicality and earnest determination by Ewa Dina takes up campaigning for justice on behalf of Brian. Brother (Urban Wolf) suffers a painful mix of guilt and anger and lashes out, feeling that he can never live up to his brother’s memory. Lover, played by Rochelle James, feels like an outsider from the family; her pain is deep but she is forced to move on -and in a slightly trite speech, explains why she’s picked a white man for her new partner – because he’s less likely to be stopped by police, ‘and that’s important’. It felt a bit on the nose, but I don’t doubt that this is a common coping mechanism.

The set, by Fran Horler, looked a bit flimsy, there were a lot of walls, which were removed to reveal more walls, all with the same cut-out of Brian’s head in the middle of them. I think one wall might have sufficed.

There was also a visual metaphor about the burden of grief and the women carrying handbags that was unnecessary and distracting.

The concept for this show came to creator Urban Wolf, aka Urbain Hayo during the riots after Mark Duggan’s death. Mark Duggan was shot because police thought he was holding a gun – it transpired that he had dropped the weapon before police apprehended him and yet an inquest ruled that the killing was lawful. His family continued to fight for justice for Duggan and have now brought a civil suit against the Met police with the hope of getting a verdict of unlawful killing.

The death of Duggan sparked a series of riots in Tottenham that then spread like wildfire across impoverished and ethnically diverse areas of London; Hackney, Woolwich, Lewisham, Croydon, Peckham, Battersea, Walthamstow. and then across England.

According to the charity Inquest, which supports families whose members have died in state care or detention, 1711 people have died in police custody to date since records began. There were 18 across England and Wales in 2018, and just one in the Met so far this year, four last year.

The stop and search element in the play was slightly skimmed over and as it’s such a massive problem in the news right now, I wondered why more wasn’t made of this. Brian’s surviving brother, played by Urban Wolf, could have been the subject of a stop and search, being a young black man with a chip on his shoulder who hangs around night clubs, he’d be a perfect target for the kind of racist police behaviour the play was trying to highlight.

Aside from this element, there were a couple more inconsistencies – the play seemed to be dated by some of the Met responses – the deceased, Brian, is referred to as an ‘IC3 male’ and also as ‘it’ in the Met press release. My police friend, who came with me to see the play, reliably informs me that such jargon is now longer used in Met police statements, because it is offensive and dehumanising. Now they would say ‘he’ and ‘black male’. The IPCC is also no longer called the IPCC, it’s now the IOPC.

These are small quibbles, and the broader message, that death in custody happens sometimes because of police brutality and racism still stands. It’s powerfully done, with each of the characters sent on their own painful trajectory in the aftermath of Brian’s death. But if Urban Wolf hopes to attract members of the Met to see his show – as he stated in an interview with ITV, these discrepancies need to be cleaned up so they can’t be used to undermine his incredibly important message.