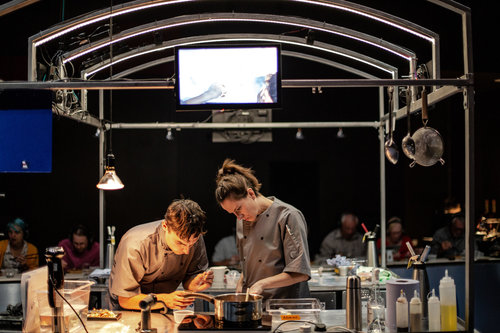 So Curious Directive have made a sensible choice for this show – audience seated, food on trays, delivered on a smooth track so servers don’t have to move from table to table and cooking done by young trainee chefs with a  menu devised by Norwich restaurants Benedicts, Shiki, The Assembly House, Namaste Village and Bread Source.

The show itself is a beautiful meditation on the links between food, tradition and place interwoven with a story about a refugee, smuggled aboard an airplane. The conceit is we are all travelling first class on a flight, the head chef addresses us directly – announcing each incoming dish with delicate tales that speak to both the characters’ stories and more universal narratives. A fish and chip dish is a walk on a British seaside pier, but also an ice-cream, dropped by the chef in a moment of sudden shock – the dish is a monstrous hybrid of the two – an ice cream cone with an ice-cream textured fish puree. Oof.

Nora is played with wide-eyed wonder by Georgina Strawson, she is a chef passionate about the meeting of science and art that is food gastronomy and its hard not to succumb to her romanticised descriptions of the food we eat. She works on a tiny two-metre square kitchen at the centre of the space ‘on board’ our Airbus A380 flight. She is joined by Luca, (Craig Hamilton) a stowaway she met in Beirut and her sous chef and former lover Agat (Ani Nelson). Camera positioned in the on-board kitchen show close-up views of dishes as they are prepped and headphones offer crisp sound quality. There are also ipads at regular intervals on our tables, but the show makes scarce use of them.

The story is rather brilliant, it distills the story of a refugee in an engaging and novel way, while subtly drawing attention to the priviledge and separateness of us, the audience, from the journeys of the characters they portray.

Still, don’t go for the food. It’s tiny and somewhat flaccid. Vegetable crisps are chewy, a coley fish sauce is salty and claggy. A prosecco and grapefruit foam is delightful and the final dish, a cherry Bakewell is a tasty though meagre portion. The rest is forgettable. For five-course tasting menu standards, this is very bad but by immersive theatre standards, it’s pretty good.