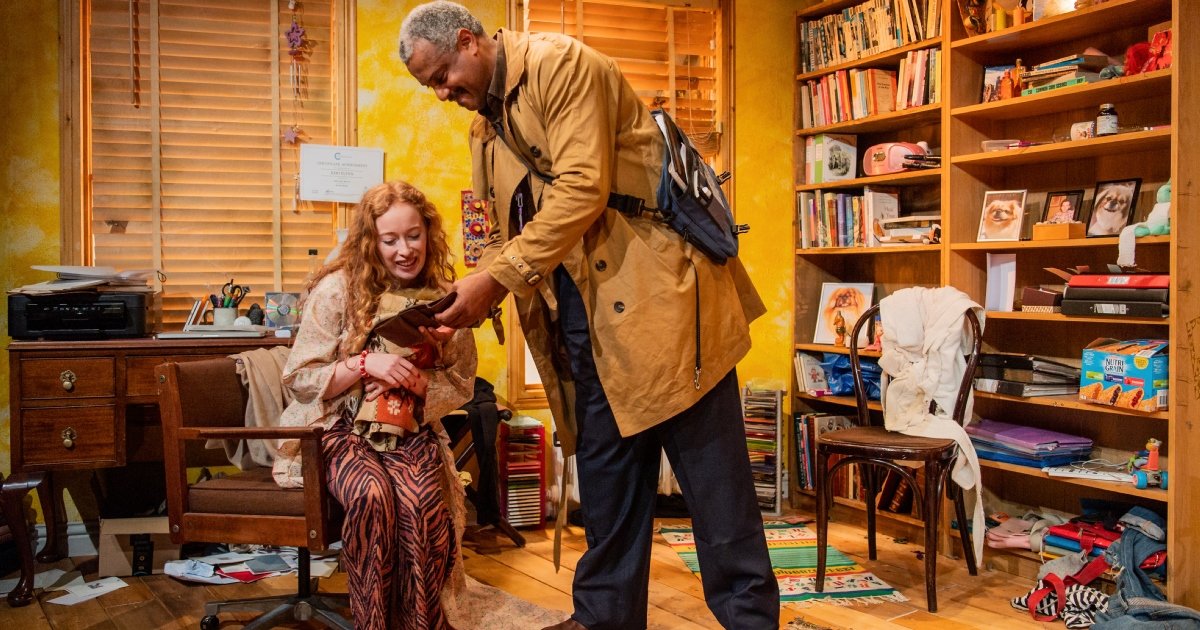 What the last few years as a country – and indeed the last few weeks – have taught us is that we live in a world that is disconnected. We live in isolated bubbles, blaming other people in other isolated bubbles for anything wrong in our lives. Isolation and loneliness are the costs we pay for convenience culture, our mental health is impacted by disconnection. What if by some miracle, two people from very different bubbles were able to pierce their respective albumens and start talking? How better to achieve that than through a mutual liking of dogs?

This is where The Dog Walker sets off.

It brings together white, middle-class New Yorker Keri and Jamaican poet, Janitor and dog walker Herbert Winston Doakes. Neither of them is as straightforward as they initially seem. God-fearing Doakes (Andrew Dennis) professes to be 17 years sober and Keri claims she doesn’t need any friends apart from her beloved Pekinese dog and emphasises the point by getting on all fours and barking at Doakes.

Mercurial and volatile Keri is one of the most fascinating characters to emerge from the stage in recent years. She lives within the confines of her tawdry 5th-floor apartment on West 49th Street, which designer Isabella Van Braeckel has managed to make look cramped but somehow more spacious than the actual confines of the tiny Jermyn Street stage, by giving the impression the alcove to the theatre toilets leads to Keri’s kitchen and creating a window with a ladder outside, where Keri spends much time sitting and gazing out, at the edge of her set, searching for a ghost of a girl that haunts her. The floor is a depository for takeaway bags and the shelves house photos of past lovers and dead pets. Empty bottles of booze litter every surface. It’s a carefully crafted insight into its occupant’s mind. Keri is clearly not well. But what is the cause? She claims to have all the answers in her self-published self-help E-books whose target readership are ‘bottom-feeders’.

Playwright Paul Minx’s writing teeters on the edge of melodrama, with the characters veering from anger to affection and back in a matter of seconds. There are more ups and downs than that Eastenders episode last week about Linda’s foot. It’s testament to the strength of the actors that they are able to seem like convincing, whole characters, especially Keri, whose mood can turn on a pin. Yeates plays her as both vulnerable and bitter. In one particularly cruel scene, she lets Doakes intimately stroke her face and then humiliates him with terrified relish. Dennis’ unabashedly ashamed reaction is painful to watch, his pride is well and truly pierced.

Harry Burton, the director, is known for directing Pinter and his input gives rise to the comedy that occurs when the two characters clash but, perhaps in an effort to make their larger-than-life personas appear believable, opportunities for heightened drama and emphasis are ignored in favour of a more naturalistic delivery. When Keri reveals the wellspring of her agony, it is rushed past and could have been a bigger moment, likewise when Doakes comes clean about the lies he’s told Keri to protect his own sense of superiority, it’s delivered skittishly and there’s barely a beat before the dialogue hurtles on to another argument.

There’s much to unpick in this richly layered production, with heavy themes of grief, depression, and domestic abuse mixed in with surreal humour. It’s a lot – and if I could change one thing, it would be to let the text breathe a little rather than getting the performers to hurtle on past crucial moments.

The Dog Walker is at Jermyn Street Theatre, 12 February to 7 March.