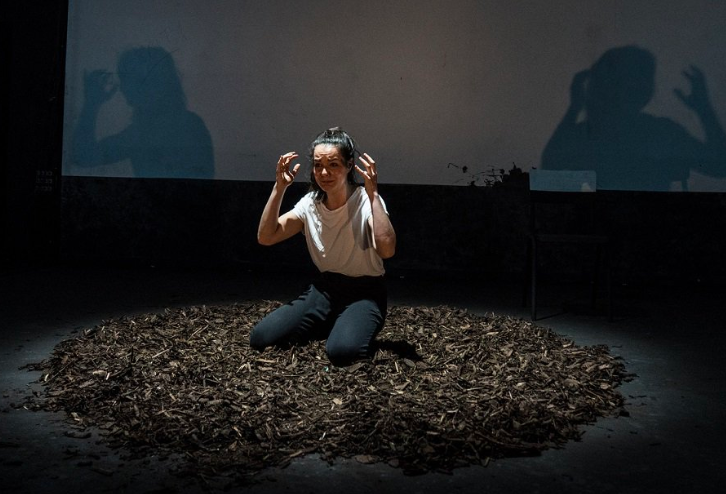 This brilliant double-bill focusing on lack of social mobility and lack of care for Britain’s working class women sees both one-woman plays sharing a stark white set with a box of white vertical strobes lights – caging them in. We learn the two protagonists are literally and metaphorically trapped by circumstances they were born into and, surrounded by prejudice, escape is nearly impossible.

First up is Box Clever, which has just been nominated for two for both Red Lily Roche’s performance and Witney’s wonderful script.

Box Clever tells the story of Marnie, a working-class mum and the many difficult and destructive characters in her orbit who are preventing her from escaping her toxic relationships, the rat-infested women’s refuge she’s stuck in and most importantly, they want to keep her away from the daughter she’s trying to protect.

Playwright Whitney’s witty, intense monologue ranks among some of the most beautiful writing I’ve ever come across and Red Lily Roche’s thrilling performance portrays 21 different characters with a deftness and ease that is a marvel to watch.

The tightly-written script draws Marnie as a difficult, angry, yet ultimately sympathetic character, struggling to keep afloat in a system that threatens to push her under. In a beautiful example of showing-not-telling, we learn how different procedural outcomes from the police, social services, social care and the benefits system conspire with personal prejudice to punish Marnie when all she is trying to do is be a good mum.

It’s a play that starts off funny before landing a that makes you sit up and realise that while Marnie is fictional her story is not.

This is then cleverly followed by KillyMuck, which doubles down on the theme that being working class, or ‘underclass’ as Killymuck writer Kat Woods frames it, means you are not offered a fair chance in society.

Longlisted for the Amnesty International Freedom of Expression Award and shortlisted for the Filipa Bragança Award, Killymuck offers a more instructional take on the issue of class life in Britain. The main character, Niamh, recounts semi-autobiographical events from Woods’ upbringing on a council estate in Ireland, re-enacting remembered slights, including an abusive father and teachers who dismissed her as ignorant because of her class. This is regularly peppered with lessons and statistics as Niamh (played with childlike joy and pedagogical assertiveness in turns by Aoife Lennon) leaps out of character and into the here and now to lecture us on studies and statistics that back up her experiences – she even draws a diagram on a whiteboard style backdrop.

This serves to both reassert that the problems in both these shows are real; working-class women are being let down by systematic failures in our social care and benefits systems right now. But the distancing jolt of coming out of character to offer a lecture made me care less about them. While Box Clever harnesses the power of theatre to show us the story of one woman’s life, thereby highlighting the plight of many in her same situation, Killymuck feels a little too preachy to be fully convinced or immersed in the story. However, Chris Sonnex’s choice to program them together was a great one. T they are more than the sum of their parts, as Niamh’s dogmatic approach hammers home the unavoidable truth of Marnie’s life – she is stuck, from birth, she has been stuck, and her children and their children will continue to be stuck at a disadvantage until real systematic change occurs.

Finally, and perhaps not least of all – and I’m saying this because it clearly informed my judgement of the show – I felt quite a lot of Niamh’s upbringing was quite similar to my own – unlike her, I had great parents – but the White Lightning binges she describes, the bullying, the unfounded judgement from teachers – they were all features of my childhood and adolescence growing up in south-east London / Kent suburbia, and I guess that, weirdly, made me less sympathetic to Niamh’s story, because it just seemed quite normal to me. Maybe more needed to be made of her father’s violence – it seemed skimmed over in places, and maybe that’s because there’s some autobiographical detail Kat Woods didn’t want to share. There is also the fact that, as Kat / Niamh says in the show, she escaped, she got a good education, she found a way out. She’s now making theatre. The key to understanding the piece is, I think, to bear in mind that she is the exception, not the rule.

“There is a forgotten segment of society that we never talk about when it comes to the ” she said in a statement about the work, “the lower classes. The underclass. The benefit class. These stories need to be told and need to find representation on stage. We are in danger of theatre becoming an elitist domain. Let’s create theatre for all just .”

For anyone complaining this week that Fleabag is too upper-middle class, if you want to see more working class narratives being performed, go watch and support these shows. You won’t regret it.