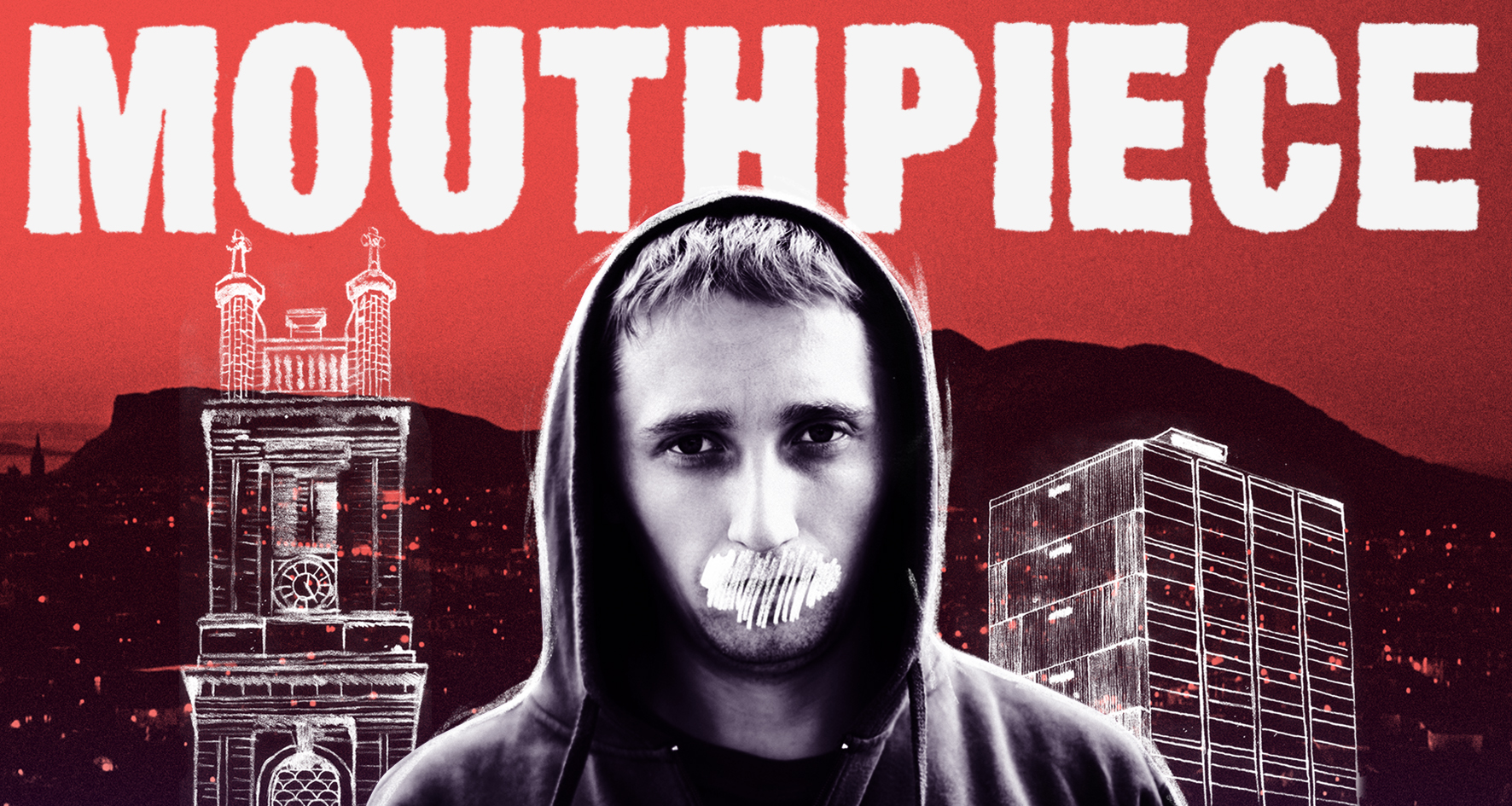 Mouthpiece by Kieran Hurley was a hit at Edinburgh last year when it premiered at the Traverse Theatre. It’s now relocated to the Soho Theatre, but it is still very much an Edinburgh play. The text refers to the Traverse and the two actors have Scottish accents, the action is set in Edinburgh. So it feels a little incongruous being performed in the middle of Soho. But there is something effective and faintly disconcerting about a firmly middle class, theatre-going audience coming to see a play about class differences and effectively being made to face the fact they are mere voyeurs to a tale of working-class poverty.

The story: Libby is a middle-class playwright in her forties who hasn’t written a play in ten years, she’s at the end of her tether and has had to move back in with her mum in Edinburgh. One night, on the precipice of suicide, she encounters Declan, a young lad from a poor family living on the outskirts of Edinburgh. Libby sees a hidden talent in Declan’s drawings and tries to encourage him to work on his art, but after spending some time with Declan and learning about the difficulties of his life, she begins to feel inspired to write; or more specifically to record Declan and use his words, his accent, his hopes, his family life, as the basis for her next play. The action plays out in a black set in a white box, with stage directs displayed in direct text above the actors’ heads.

Libby also steps outside the action to explain the technical processes of playwriting in the middle of the action, reminding us all that we are watching a play created by her character, in the play. This device really works to draw attention to the central question: who owns your story? and how much should a playwright borrow from real-life before they end up copying it wholesale?

The sleek design, by Kai Fischer, makes reference to how ‘meta’ the play is: the stage is a big square box, framed like a TV screen, which the actors step in and out of, overtly breaking the fourth wall, there’s a play within a play that draws attention to the story of Declan, a young, artistically talented boy from the estates around Edinburgh, who has a lack of opportunities and is hampered by a dysfunctional family who prevent him from flourishing and how his story and stories like his continue long after the curtain comes down (In fact, the curtain doesn’t come down, the actors step outside the box for the curtain call).

On the one hand, it’s a theatre show for theatre people, with plenty of in-jokes about the lofty aims and transformative power of the theatre, which will almost always guarantee your play some degree of critical attention, but, more interestingly the performance has generally been celebrated for brilliantly drawing attention to below the breadline poverty in urban populations, and exploitation of stories that belong to other people. If a playwright tells your story, using verbatim transcripts as their foundation, does it stop being your story once they tweak it and put it on stage?

Of course this debate rubs up against the argument that actors shouldn’t be limited by their background, gender or colour. Calls for colour-blind and gender-blind casting are generally applauded by industry leaders – the message being that the craft of acting by its nature involves understanding and portraying multiple lives.

But where do the writers fit in this? The slogan ‘Slay in Your Lane’ pops to mind. Yomi Adegoke and Elizabeth Uviebinené’s ‘Black Girl Bible’ that popularised the phrase talks of the struggles of black women in business. Their book was a revelation because it found there some were struggles common to black women in business that other women in business did not experience. The essence of that slogan has come to mean: do your thing, do it well, but don’t step on other people’s toes, don’t try to do something someone else is trying to do, just do your thing, brilliantly.

So, my point is, for writers, the rule is different from actors: Theatres want authentic stories and authentic voices, but for writers appropriation isn’t cool.

Mouthpiece comes down clearly on this side of the debate. Libby, a suicidal playwright played with nervous tension and a sense of fraught low confidence by Neve McIntosh and  takes advantage of Declan (played with on-point Edinburgh slang and fractious teenage mannerisms by Lorn Macdonald) on multiple levels in order to use him for her own gain; to make a successful play out of his story.

While Mouthpiece brings up issues of class and exploitation with compelling finesse, it might have been interesting to see a story that wasn’t so black and white – where Libby didn’t exploit Declan’s story so completely, or where Declan had something to gain so that the exploitation was mutual – it might have prompted more questions at the bar afterward about where the line is between being inspired by someone else’s story and stealing it and how much credit to give them for it.

Book your tickets at: sohotheatre.com/shows/mouthpiece